I heard someone talking to or about the the writer Ocean Vuong every time I turned on the radio last week, and then I opened the New Yorker and saw him in there. I recognized his name from the cover of a book of poetry I picked up a few years ago, Night Sky with Exit Wounds, which I picked up again hearing all the talk. So I took it as a sign when I opened Instagram first thing Friday morning and saw the Indy Week post announcing Ocean Vuong’s reading and signing at Quail Ridge Books that very night. I ordered his new book, the novel, On Earth We’re Briefly Gorgeous, and attended the reading. 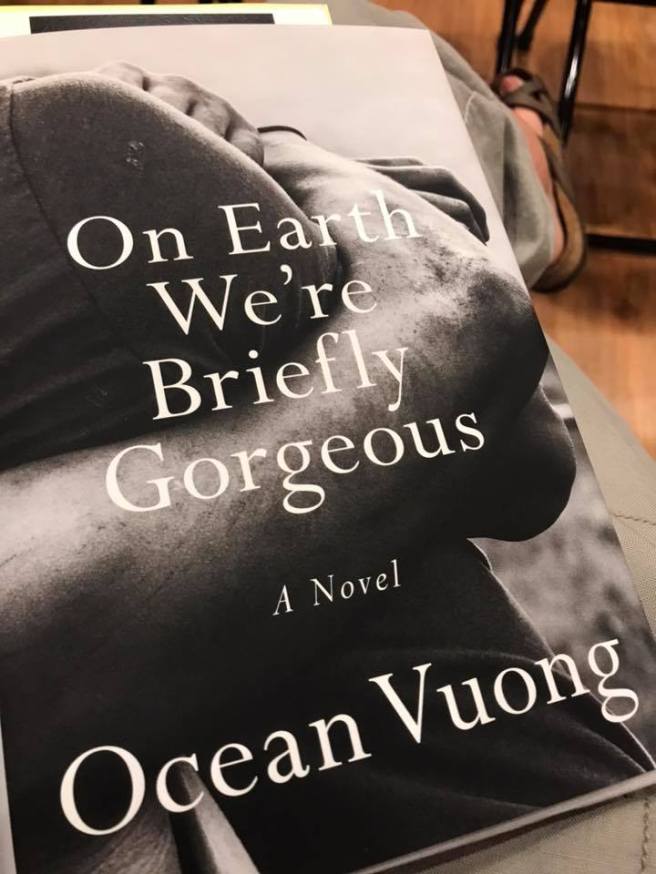 I haven’t read the whole book yet, but the talk was full of wisdom nuggets I wish I had thought to write down at the time.

His hair had grown out since his pictures and he wore thick glasses. I wanted to take a picture, since it seems like he might win the Nobel Prize one day, but lifting my phone over the heads of quiet people in communal awe felt wrong. He seemed shy at first. I noticed empty seats and then Vuong invited the standing guests to sit. He said he was told never to expect a response to his writing, but the graceful violence of his words in poetry and prose induces response. I don’t mean that the writing is about violence, though it often is, but there is something shattering about his language.

Read this first page and a quarter of his novel:

word further from where you are. I am writing to go back to the

time, at the rest stop in Virginia, when you stared, horror-struck,

at the taxidermy buck, hung over the soda machine by the rest-

rooms, its antlers shadowing your face. In the car, you kept shak-

ing your head. “I don’t understand why they would do that. Can’t

they see it’s a corpse? A corpse should go away, not get stuck for-

I think now of that buck, how you stared into its black glass

eyes and saw your reflection, your whole body, warped in that life-

less mirror. How it was not the grotesque mounting of a decapi-

tated animal that shook you–but that the taxidermy embodied a

death that won’t finish, a death that keeps dying as we walk past it

with because. But I wasn’t trying to make a sentence–I was try-

ing to break free. Because freedom, I am told, is nothing but the

distance between the hunter and its prey.

He talked about who makes the worlds of fiction, the Great American Novel, versus just a book, a memoir, or an anthropological journey. Ernest Hemingway, Herman Melville–these are the makers of worlds, while non-white writers are seen as “anthropological tour guides in pre-made worlds.” At least that is the way it has been, perpetuated by publishers and editors that want to make sure white monolingual Americans feel the advantage of knowledge and recognize the worlds they find themselves in.

I remember learning as a kid, around the 3rd grade, the term “melting pot” relating to American culture. We are a melting pot because American culture is made up of people from all over the world. (I misunderstood the word as smelting pot back then, but I still understood the intended meaning.) I liked believing that and it took a long time before I realized that it was a fantasy. In Vuong’s world, it’s a reality. He is a Vietnamese American who doesn’t attempt to isolate the parts of himself or answer hypothetical questions that begin “If English were your only language…”

America in the world of Ocean Vuong is a melting pot. He talked about his choice not to italicize languages other than English, which English speaking readers are accustomed to seeing, a choice which his publisher fought to override. He explained that when we walk down the street in New York City or Raleigh we hear different languages and no one stops to interpret them for us. That is an American experience. Giving one language preference over another also gives one group of readers a sense of familiarity and reinforces foreign feeling elements in the story as exotic. It tells us who the story is directed toward and who should be comfortable in that world. Ocean Vuong is not an anthropological tour guide through someone else’s world. He made this world.

While I was listening to Vuong speak, I thought of White, the play I saw a few weeks ago, and again yesterday, written by James Ijames, performed by Bulldog Ensemble Theater in Durham and directed by JaMeeka Holloway-Burrell. I’m sorry if you didn’t catch this before it closed yesterday. It’s a thought-provoking dark comedy about art, racism, sexism and identity.

The show starts before it starts, when the schmoozy white curator at the Parnell Museum, Jane, played by A.C. Donohue, makes her rounds with the audience, soliciting donations, and making people (namely, me) generally uncomfortable. Her pre-performance was disarming – a perfect way to either collect money or begin an in-depth examination of race and identity in the world of art. My sense of vulnerability was magnified by the in-the-round seating. As I saw the responses of other audience members, they saw mine.

There is so much about this play and the performance of it that I loved. It’s as funny and entertaining as it is thought-provoking and important.

Jane is looking for more diversity for her first show as the curator–she gets eerily excited at the thought of a Colombian Chinese or African American artist–and therefore denies her artist friend Gus, a gay white man played by Jordan Clifton, a spot in the exhibit. I don’t want to tell the whole story of the play because you should really see the twists live if you get the chance. But Gus’s paintings are completely white–no color at all. He attempts to hijack the life and person of Vanessa, an African American actor played by Monét Noelle Marshall, in order to get his own way as he is accustomed. At one point, when she is in his studio attempting to understand his work he says to her:

Just… Look closer. Extend yourself into the world of the painting. Into the whiteness.

And she responds with:

The part that Ocean Vuong’s talk made me think of was when Vanessa brought up racial tourism. She says:

… it’s like…”Let me play double-dutch with the black girls on the playground ‘cause they make me feel all empowered and fierce. They can teach me comebacks and how to wag my finger and I can be just as fierce and fabulous as them but, without the burden of actually being a black girl.”

Marshall was truly amazing in this role, switching from vulnerable and hurt to “bad bitch” and back again in within seconds. When she’s looking for approval for a new persona from Gus she speeds through five or so personalities in less than a minute, each one interesting and distinct. I said in an earlier blog post that I’m not a crier, but maybe I am, because I could not keep it together during her delivery of the closing monologue, even the second time when I knew what was coming, some of which follows:

…This work comes from my experience: trying to fit in. The times when I felt alone. In a sea of white. Miles and miles of white that I was expected to be a part of. To live inside of.

Even more than Gus, the world maker in White is Jane, who is a hypocritical idealist hiding behind false feminism. Her world is white with a splash of color. She wants diversity in her exhibit to serve her own interests, and to serve the museum patrons a taste of something exotic from within a white world.

I would rather live in a world where I feel the discomfort of not knowing a language, not being able to identify a favored audience, of being disarmed and vulnerable, and of not having the advantage of familiarity as I walk through my daily life. I don’t know in what ways I might be like Jane or Gus, and I know that up until now I have expected foreign languages to be italicized, but more disarming World Makers like Ocean Vuong and James Ijames will chip away at deeply held, possibly subconscious ideas that stories and the world should bend more easily in certain directions.

View all posts by Denise Cerniglia